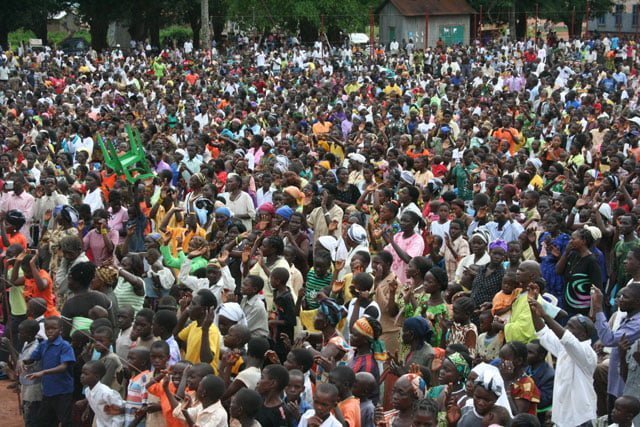 Yambio South Sudan.  26th – 30th May 2010
Oh to be back in Sudan and see some of the folk we had met during our 2002 meetings.  Do you remember me I was just a young boy when you came with the tent, I am now serving God.  Or the lady who was totally mad roaming around the town of Yambio naked living off the very limited garbage people would throw out.  What a burden she was to her children what a nuisance she was in the town but back in 2002 The Lord touched her in the tent meeting and she was totally restored of madness of mind.  Now years later she was still praising God for the wonderful miracle.
The first day’s meeting coincided with the inauguration of the new governor.  We started soon after these celebrations had finished, which resulted in many of the crowd just coming over to attend the Gospel meeting.  All was going well when suddenly what seemed out of nowhere a cool wind began to blow heavy black clouds soon seeped over and it poured with rain just as I had taken the microphone.   People scattered and took cover in every possible place while  Charles my interpreter and myself just stood on the stage with an umbrella for 30 minutes of so as it passed.  To my surprise very few people had left.  The crowd even grew.   I preached a very clear Gospel message which touched many hearts.  The Lord had given us a huge harvest of souls coming into the Kingdom many hearing the Gospel for the first time and many also re dedicating their lives to the Lord.
Have you ever been witnessing to a friend or a relative and it seems they have are able to resist and refuse to surrender to the Lord calling them.  Have you ever thought how God reaches the lost?  We know God never does His saving work alone but gives man the privilege to be involved.  Our involvement includes being a sample of grace alongside a person.  It includes intercession and representing the person before the throne of God and then it includes pleading with the person on behalf of God to be reconciled to Him.   But after we have done our part it is up to God to do the actual saving.
Through the ages there have been hot debates on the subject of regeneration, how much of the new birth of a soul is God’s work and how much man himself was involved.  Asking some folk how they came to know Jesus, came this wonderful answer.  ‘I fought against God with all my strength and He Won!’  Well in Yambio the Lord moved in a wonderful way and won, there was a tremendous openness to the Gospel and a resounding YES at every alter call.  When God touches a heart with His Love it’s almost impossible to resist.  It was refreshing to see The Lord at work bringing in the harvest.   What a joy to have been involved in what He is doing.
Every night seemed to grow and grow.  It’s hard to get a clear figure of the new state of Yambio Headquarters but we estimate the town population to be approximately 20 to 30 thousand people.  What was remarkable that the Lord drew most of the population to the meeting on Sunday?  After an hour or so of jubilant praise and singing I took the microphone and started to preach the Gospel, suddenly the crowd beginning to scatter.  Another fierce storm was rapidly approaching!   We prayed asking the Lord to hold back the rain and the Lord totally stopped the rain, this was a real sign to the people that Jesus is alive.  Most of the crowd returned and the Lord moved seeking and saving the Lost.
Another touching miracle was a man partially blind he could not see more than a meter or so but the Lord touched him as he sat in the crowd and his eyesight was completely restored.  He was amazed to see!  What was remarkable he read from a bible with tiny print I could not even see!  Later we discovered this man was a prisoner and had somehow been loosed from prison to attend the meeting.
Shireen went into the prison and spoke giving a strong appeal to the 70 or so prisoners to surrender their lives to the Lord.  I sensed the Lords love and compassion for them as they repented of their sin as most came forward and knelt down some of them were in chains hand and foot.  I pray the Holy Spirit will work deeply in their hearts breaking every spiritual chain.
The Lord helped us in a marvellous way with a driver and already the truck and Benson are in Maridi.  Please remember us in prayer for the Maridi meetings 23rd -27th June.  The message of the Cross changes lives forever.   The Gospel is eternal but we don’t have eternity to preach it.  Now is Sudan’s time.
Yours in Christ Jesus
Roger and Shireen West.