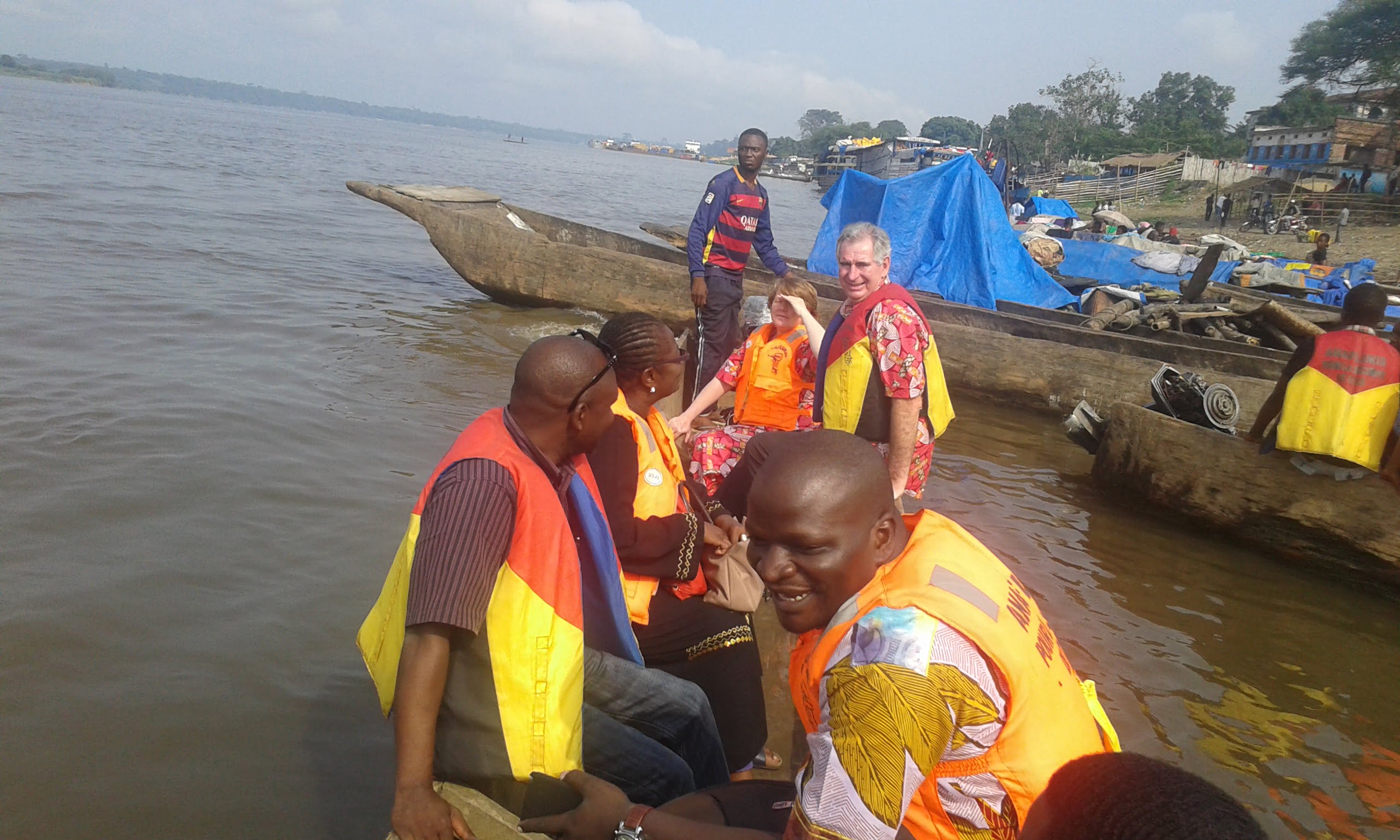 Lubunga is a city across the great Congo River from Kisangani. We crossed the wide strong‑flowing river on a dugout canoe, which was fitted with a small outboard motor on the back. It only took seven or eight minutes to complete the journey, but there was a totally different spiritual climate permeating the whole of Lubunga. Here, there was a real openness and sensitivity to the Gospel.

Arriving at the church for the morning Fire Conference, the church was almost full. Our goal is to stir up the church in order to be actively involved in Evangelism. The word was well received, and some of the local members made a video recording of each session. I believe this message will go far and wide.

During this three day Fire Conference, some of the leaders told us that there had been a noticeable drift from the purity of the Gospel. When wrong doctrine is embraced in the Congo, it usually involves money! However, God’s Word stabilised the church, and the plumb line of God’s standard re-calibrated many. The call to become involved with Evangelism within the church was accepted by many of the pastors and leaders.

In order to avoid crossing back to Kisangani, we decided to go straight to the field for the Gospel meeting.

At first, the people were slow in coming, perhaps on account of the sweltering heat, but slowly the field begin to fill. I preached a clear message – turn from darkness to light. By the time of the altar call, the Holy Spirit had touched their hearts as almost every hand shot up saying yes to Jesus. No one who comes to Him will He refuse. Tears flowed, knees bowed and Jesus saved. It was wonderful.

It was heart-breaking to see the sick and suffering standing in the intense heat so we arranged special seating for the very sick and those that came especially for prayer. This special area was in a rectangular concrete foundation, somewhat like a swimming pool. It had been constructed for a building that was never completed. We called it the ‘Pool of Bethesda’. Wonderful healing miracles flowed. A lady, who could barely see out of one eye, testified how she was so discouraged because she had been prayed for all week without change. Towards the end, the Lord gloriously touched her, and she testified that her sight was now restored, and rejoicing that God had heard her prayers! I was amazed that she could actually see, because her eye was all milky with no colour in it. Yet she was overjoyed that now she could see!

When we finally closed the meetings, we made our way back to the beach and crossed the river at night. Canoes were buzzing across in almost pitch darkness. How they did not collide is a miracle in itself! For our crossing, a co-navigator stood at the front of the canoe using the light on his mobile phone in order to show our position. It seemed to work, since we arrived safely. A cool breeze from the river was very refreshing, but I am not sure that I liked the thousands of biting insects on the way back! It had been a long hot day, but all this faded to insignificance when we reflected on what the Lord had done to reach Lubunga with His love. A joy overwhelmed us that we could be a part of His eternal plan.

On the second day, the heavens opened again, and it rained like it can only rain on the equator. For an hour or so it poured down just flooding the field in places, which was knee deep water. We had to turn off all power for safety reasons and eventually, when it had stopped, I preached to a small crowd without a microphone. A wave of God’s saving grace swept many into the Kingdom.

We had to rush back to the dugout canoes for it was now six o’clock, and when there is rain they stop operating at six. Thankfully, we caught one of the last ones back. The thunder storm was now over, but lightning poses a very real threat on the river.

On Friday afternoon, there was no sign of rain at all, but it was very, very hot. Normally the crowd can be quite noisy and has to be encouraged to keep quiet. Lubunga was so different; there was a great attentiveness to the preaching of the Word and a great reverence when it was time to pray. Again many believed on the Lord Jesus Christ and were saved. We prayed for the sick and went down and prayed for all those in the ‘Pool of Bethesda’, where the very needy and sick were located. I was puzzled why there seemed to be so few testimonies of healing, until one of the organising pastors showed me a little exercise book with pages of recorded miracles. They had reported their personal miracles to the local pastors and leaders, who made a permanent record of them. Surely the Lord is the Lord God our healer – Jehovah Rapha.

The town of Lubunga heard the Gospel with gladness and opened their hearts wide. The Lord saved and healed and there was great joy in the city. 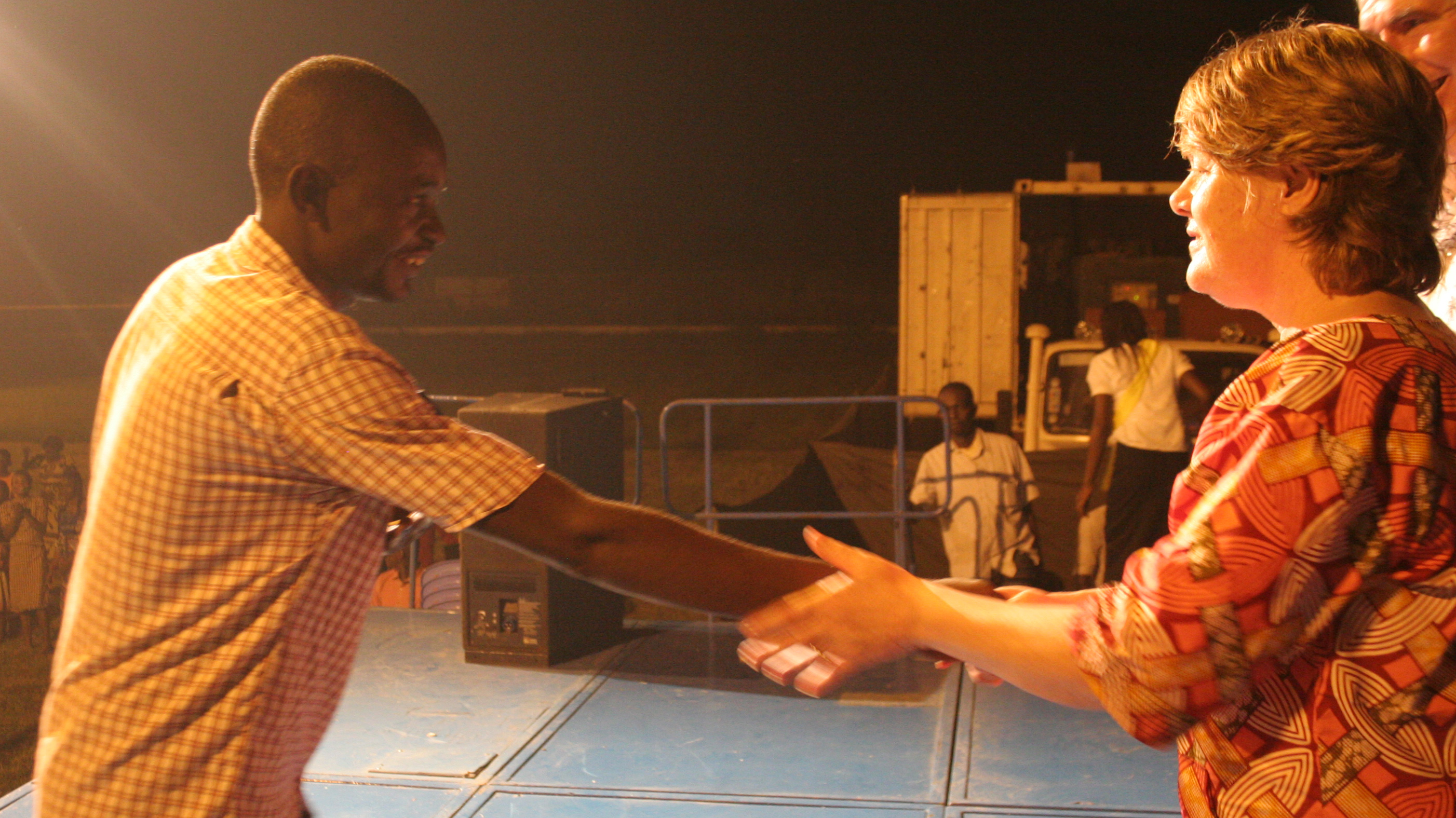 Fire Conference 3rd  to 5th August
Due to Logistics and The rainy season rapidly approaching we planned a 3 Day weekend Gospel Crusade to close this season with.   As well as a 3 day Fire Conference.
Many young people attended as it was collage and school holidays – they are the new generation the hope for DRC the future leaders and the future Evangelists.   Its so important that these young people catch and take the button and run their race with all of their strength.
At first just a few people were dotted around the stadium.   But we had printed hand bills and handed them out around the streets of Kisangani.  Many considered this a personal invitation.   Slowly young people began to arrive, some wild unchurched groups, some even looked a little drunk, these were the ones that needed to hear the Gospel.   I preached and there was a mighty open and hundreds of youth responded.   Every one of them received a followup book.   And as I was leaving the stadium they all seemed to shout LOBI which means tomorrow.
When we prayed for the sick There was a lady who was standing in her house nearby. She bowed her head and placed her faith in Jesus.   Immediately her paralysed arm was completely healed!   She came to the meeting to tell us what the Lord had done.   A group of young men all shouted at the top of their lungs in amazement.
It blessed me to see a young man come to testify, with his followup book in his hand.   “I received the invitation,  I used to always receive invitations to Church and wasn’t interested to go but this time somehow  I thought I should come.  Jesus has SAVED ME!   I believe in Him.”

Hundreds of young people came forward to the alter call area and knelt down with great reverence to receive Jesus as their Lord and saviour.  the Lord moved and touched many hearts.  As we were speaking a strong wind kicked up and blew some of the chairs over on the stage, It was moments till drops began to fall and rain began to fall.   But we had already prayed for all the sick as the rain steadily increased people scattered for cover.   Lightning flashed across the sky and peels of thunder rang out.   The meeting was over for the Night but God had saved, He had healed.  Heaven was richer and hell was poorer. 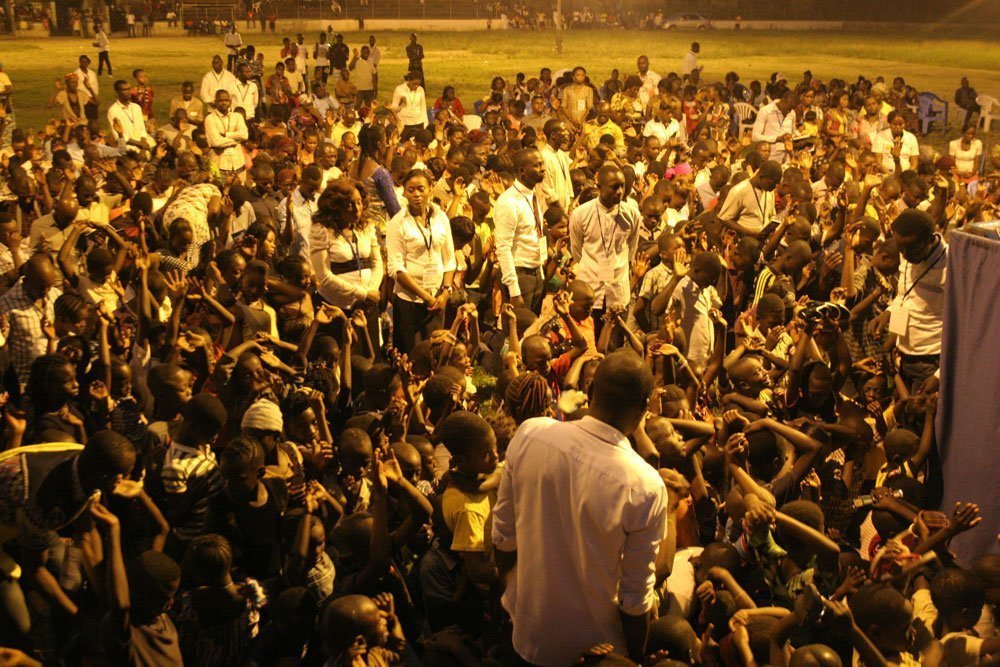 I preached the most simple message on the Cross and crusifiction and the Holy spirit moved in and convicted hearts.   It was wonderful to see how people who were just standing standing at the stadium gate, out of curiosity, not even entering.  Yet as they heard Gods Word and felt the power of the Holy Spirit they ame under conviction and opened their hearts to Jesus.

The Higher percentage of the population by far is the young people under 18 or 15.   So many young, un-churched youth just came in of the streets.  Just hungry for Gods Word. These are the people that need the Gospel, that need Gods word to be a lamp unto their path and a light to their feet.   It was good to see so many moved and open to the lord.

It was a long journey to Buta; two flights, a day’s journey crossing several dangerous bridges and a ferry but at last we arrived at Buta Palace Hotel. We were thankful for a huge drum of water in the bathroom to wash the dust of the road off us. Later, we were brought a wonderful Congolese meal of fried plantain and chicken. The Lord had touched a business lady in the city to feed us for the duration of the crusade.

Our technical team were already in Buta setting up the staging and equipment. It was one of the longest journeys that we had ever undertaken into the DRC. Joseph, our driver, told us how he had to reverse onto a ferry, as it was unable to turn around, because he had to drive off forwards, on account of the incline at the other end, which was extremely steep. He told us about a petrol tanker, surrounded by spares and bits and pieces removed from the engine, because the driver had tried to reverse off the ferry and the vehicle stalled halfway up the slope. The driver then lost control and it rolled back into the deep water. Water flooded the engine, and it stalled. However, the Lord helped our team and they arrived in Buta without any incident. I was pleased to see them and to see that everything was ready for the next day’s start.

People came from all directions, some walking long distances just to be with us. During the preaching, the crowd were attentive to every word, so that, when it came to the altar call, God really touched the hearts of the people. It seemed that almost every hand was raised to turn and follow Jesus, and to leave their old life-styles behind.

The Lord healed and touched His people. A man, suffering with pain in the stomach so much that he could not bend, was instantly healed. Joy erupted and the crowd praised the Lord with song and dancing.

The seminar was attended mainly by leaders and pastors. The Holy Spirit moved, and imparted His blessing to all those present, by stirring them up to arise, shine and take the Gospel to the lost.

On the Thursday, as we arrived at the field, a mighty storm began to blow. The clouds burst and it poured with rain for over an hour. Nevertheless, many simply stayed in the rain, even in ankle deep water. I took the microphone to begin to preach in the pouring rain; the wind was so strong that it took two men to hold the huge umbrella in an attempt to shield us (and the electrics) on the stage. The umbrella did not help, and we all ended up dripping wet. Even my shoes were full of water! I gave an altar call and there was a good response even in the rain. People were in no hurry to leave; they had tasted something heavenly – God’s presence, God’s saving power. The staff from our hotel were even present on some nights. Jesus saved and ministered to the people of Buta making His presence known to them.

Although it had been the longest journey ever undertaken by our team, it was well worth it.