Imphondo The Republic of Congo 2007 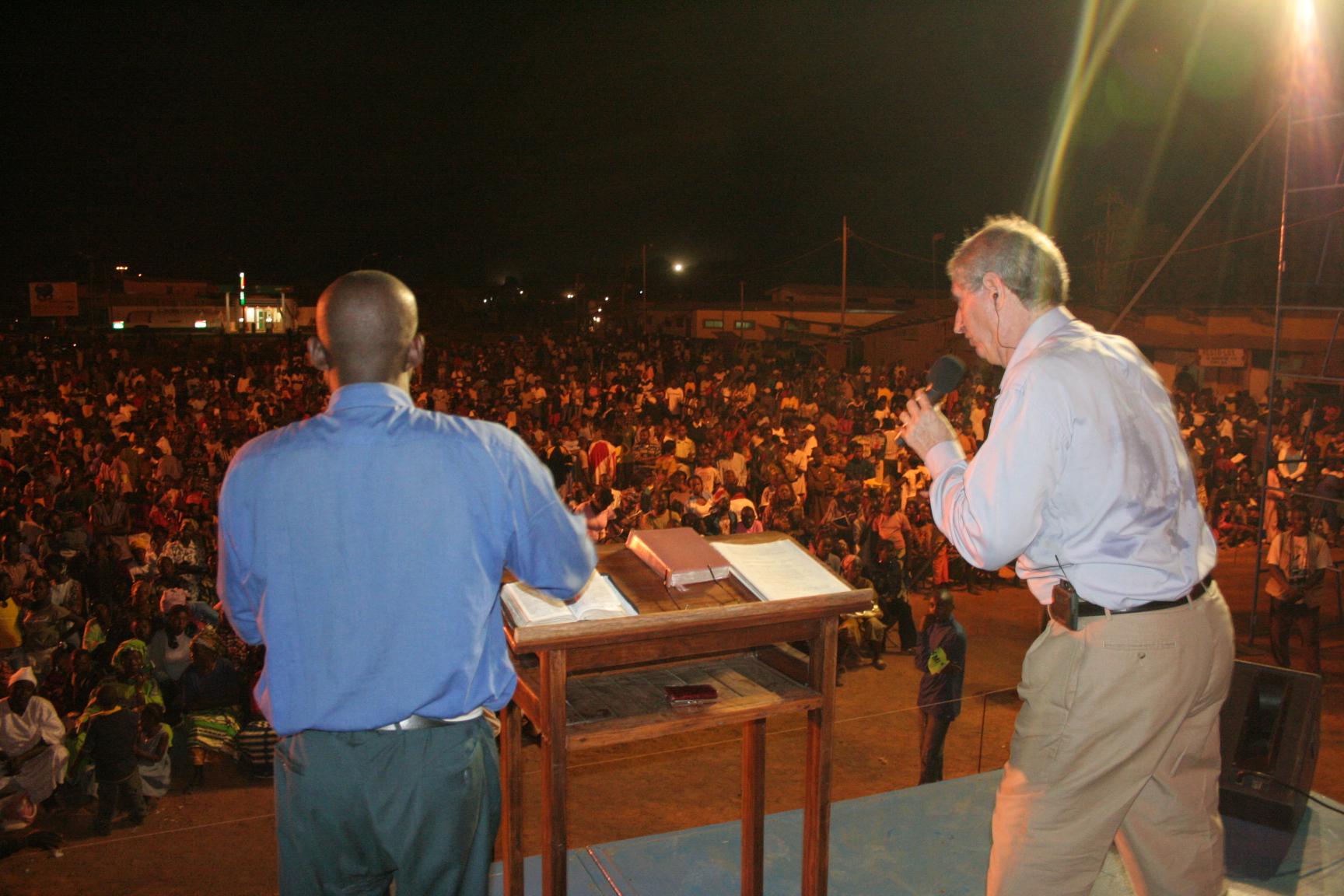 The population of Garissa are in essence Somalis who were, with or without their will, put under the administration of Kenya. On arrival, the local Christian leadership told us how the last Gospel Crusade had ended with a radical group burning the stage! However, God opened the door, and we were able to have a successful Gospel meeting, clearly proclaiming the Good News and demonstrating the Love of God practically by providing food to two orphanages, which were in desperate need. It was wonderful to see God’s timing, as we delivered the food on the very day they were cooking their last meal. “Greatly encouraged” was a phrase we heard over and over again. Several people testified how they were worn out, and about to give up due to the harsh conditions. But God imparted courage and strength to them. Many men and woman called to the town were strengthened by the Holy Spirit and are now more determined than ever to keep on working until the Kingdom of God is established. Several partners donated books and literature, which we were able to give to the leaders in order to further inspire and strengthen them to continue their tasks.

Maua is known for the $250-million-a-year export trade of miraa (or khat – grown for use as a stimulant. Chewing khat predates the use of coffee and is used in a similar social context. It is classified as a drug of abuse that can produce mild to moderate psychological dependence). The export of miraa is now so popular that it has become one of Kenya’s chief exports, still behind tea but now ahead of coffee. Many marvelled and told us how they thought that we would tell them how wrong miraa was, but, because we only preached the love of Jesus, hearts softened and opened up, whereupon approximately 15,000 called on Jesus for salvation! A few months before the crusade, we had been told about a man of God who spoke out harshly against the trade. Consequently, had to be escorted back to Nairobi with police protection! Once again, a city, which many considered closed to the Gospel, responded and opened wide their hearts to the wonderful good news.

The 11 day boat trip up the Congo River to this remote city was well worth it. We are truly living in exciting times – times in which the Harvest is white and ready to be reaped; times during which an entire city will hear and respond to the Gospel. The Gospel is most needed where it has never or seldom been proclaimed. It always amazes us how open and spiritually hungry people are in these remote areas. It is not uncommon for people to walk long distances to attend the meetings. There are no chairs, yet they gladly stand for hours at a time in the sun. Suffering people come in wheelbarrows, on bicycles, or in cars fully expecting to be healed.

This intense spiritual hunger and expectancy creates the perfect conditions for real heartfelt conversions to take place, and real biblical miracles to be experienced. These are the areas, the ones that are wide open and ripe unto harvest that we must reach out to.

We estimate almost 2/3 of the city turned out to hear the Gospel message! Almost every hand instantly shot up at every call for salvation. I believe the Gospel message will leave an indelible mark on the hearts of these people. The Kingdom is advancing. We were also able to speak to the city’s key church leaders and encourage them to put their differences aside and form a fellowship at which they could pray, work and resolve difficulties together. This was well received and has promise of developing into the first ‘Pastor’s Fellowship’ in the city.

We can only say that with God everything is possible. All odds seemed to be against us, but little did we know that every impossible situation was a miracle in the making.

We left Impfondo rejoicing that we had found a boat to transport all the equipment and follow-up books back to Brazzaville, but little did we know that the boat would soon break down and leave us stranded for weeks. Eventually, we found another boat, but then we had to arrange for labourers to transfer the equipment onto this boat. Labour requires wages, and that would have involved two boat journeys, an air-flight, and the best part of one week’s travelling time!

But God did it by touching the heart of a high ranking colonel. This officer hired the labour, and supervised the transfer of our goods as an offering to the Lord. Hallelujah, we were back on schedule – well, almost back on schedule. There was one slight hitch; the boat did not have enough room to carry our Land Cruiser and generator.

Several days later, all the equipment arrived in Brazzaville late one Friday night. We were told that no work would be done over the weekend. Therefore, we made arrangements to load and transport the equipment on Monday, and drive it to Dolisie.

Early on Saturday morning, one of our team received a phone call. “We are unloading now. You had better come quickly, or all your equipment will be stolen. You cannot leave it in the port. It must be removed today!”

More transport arrangements were made, but when the drivers saw the amount of equipment, they refused to carry the goods, saying that they were far too heavy. It was another blow to our plans, but as we needed to move fast and get the equipment out of the port and in a safe place, Bernadette hired even larger trucks. However, these were intercepted on their way to the port and their drivers were told by the previous truck drivers that the loads were too heavy. In actual fact, it was nothing to do with the weight of the equipment, it was all to do with fact that they knew that we were desperate for time, and wanted to hike up the cost.

Five sets of trucks later, we found someone who would do the job! A soldier told us of a ‘safe place’ in which to store the equipment over night.

The team, by now quite exhausted, finally offloaded the equipment at the agreed place, and were just covering the last pieces, when a group of people arrived and demanded payment for using their land. Unfortunately, the man who gave us authorisation had gone! Therefore, we had to agree on an amount and pay, there was no other way; but the group did assure us that everything would be safe. We later learnt that we had walked right into the lions den, as the compound reputedly belonged to the biggest gang of thieves in Brazzaville! No petty thieves dared touch our equipment, as they thought it was already under the control of the main gang, and so we lost nothing!

The next day (Sunday), our main task was to get some trucks again. It seemed impossible, as the drivers were reluctant to head south saying it was rebel-held area, and too dangerous. Bernadette, who had now been given the name “Iron Lady” by all the officials, went to the train station to see if we could get the equipment on the train. We had previously been told, in no uncertain terms, that they would not be able to carry it, but now, they agreed there was space. There was only one problem – they closed at noon, and it was now past 10am. “No problem”, said Bernadette, “Wait for us; we will be back soon”. Well, that is what she thought. This time the truck drivers were determined that they would make a small fortune out of us.

Again, the Lord blessed our endeavours, as we found an out-of-town truck offloading wood at a depot. We commissioned the truck, and returned to the station, only to find that it had closed! The man at the gate told us to come back on Monday. We were not prepared to wait until the next morning, so the ‘Iron Lady’ telephoned the stationmaster at his home. He agreed to come back, and, as a blessing to us, he also brought all his staff! The train was finally loaded, and we were ready to go.

On Monday morning, the team, together with literally thousands of others, boarded the train. A soldier sat next to us, and told us that as we were going to pass through rebel-held territory, rebels would board the train and demand money to ensure that the luggage remained safe! As evening approached, we heard gunmen running on the train roof, and a gangster moved from coach to coach collecting money from every passenger. As the night went by, this gangster kept returning to our coach and stared at us. Eventually, he sat down next to Bernadette and said, “I’ve been doing this since I was 14 and now I am 24. I have done such bad things. I just want to get my life right. Will you pray for me?” “No!” Bernadette said. “God does not want to hear my prayer; He wants to hear your prayer”. Amazed, he exclaimed, “You mean God can hear me?” Bernadette preached a short Gospel message to him, and he literally got down on his knees and prayed the prayer of salvation! At the next station, he got off the train, and bought peanuts and bananas for our team. He said, “Madam, I have no mommy; will you be my mommy?” “Yes”, Bernadette said, and took off her yellow cap. “Take this to remember me, and phone me to make contact”. Moved to tears, he left the train.

Since this incident this young man has made contact with us and is now looking for a job.

The meetings were held right in the town centre. One phrase we heard over and over was this is what Dolisie needs to hear, the Gospel like this. Nothing matches the Gospel when preached in purity and simplicity. The results were outstanding. The week’s meetings literally doubled the number of believers in the town from 4000 to 8000. Spectacular and unusual miracles took place. We prayed for broken families. A lady testified how her husband had left her 10 years ago, and never made contact during those years. But now he called! He was very sorry, and wanted to reconcile and send her money!

Migori will be remembered as the crusade at which prayer prevailed and the rain stopped supernaturally. So dramatic was the sudden stop of the rain that it resulted in a hardened soldier giving his life to Jesus. A dear old lady, who had suffered with locked joints in her fingers, could not freely open and close her hand. She had suffered for three years with her hand frozen in a fist position. As the Gospel of the Kingdom was preached, she believed, and suddenly, her hand loosened and she was completely free. She opened and closed her hand without any difficulty. Pastor Joshua, the crusade chairman, phoned us while we were in Bungoma to testify that one of his branch churches was overflowing with new believers, and had now outgrown the mother church.

Close to the Uganda border, we held a crusade with a large percentage of children. The foundations being built into the young people are the future hope of Kenya. The three day Fire Conference impacted and strengthened Bungoma’s Pastors and leaders. Each delegate that attended the Fire Conference received two of Evangelists Reinhard Bonnke’s books as a gift. 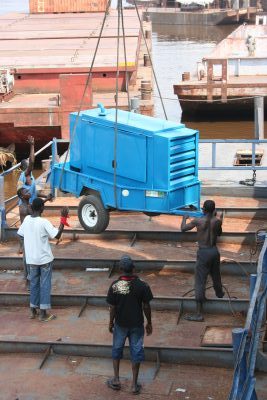 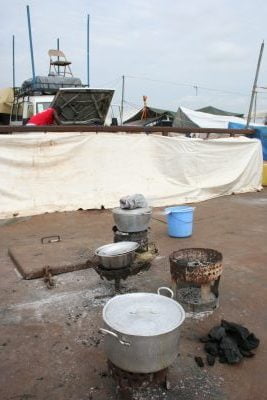 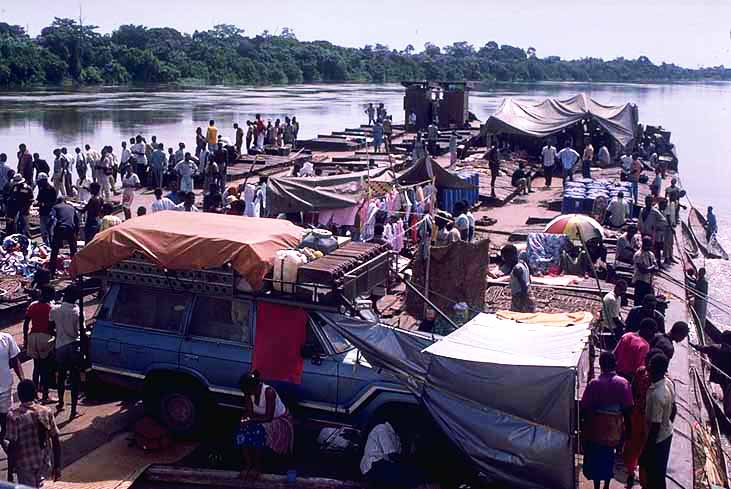